- March 09, 2020
For my magazine cover, i have chosen to have Aisha featured in the front cover and Brandon will be on the inside where i will talk about him. The reason for this is because Aisha has a nice background to her image and the edgy look will give attraction to my magazine.
Post a Comment
Read more

- March 02, 2020
In order to finalize the idea of my magazine, the following questions will be asked to both Aisha and Brandon: 1. What inspired your style? 2. Do you dress like this on an everyday basis? 3. Did music or any artist have an impact on your style? 4. Has anyone ever judged the way you dress? 5. What impact has dressing like this had on you? 6. if you were the opposite sex, what would you wear?
Post a Comment
Read more 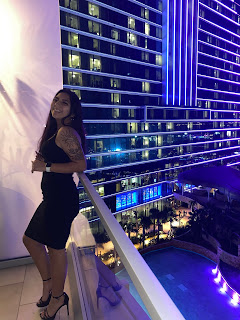 I have chosen Aisha Medina and Brandon Sanchez to be my cover models for my fashion magazine here at American Senior High School. Aisha has participated in various fashion shows and has in fact been mentioned in the school year book for her edgy type of fashion. Brandon will be the more sporty/professional because that's just how his style is.\ Aisha Medina:
Post a Comment
Read more

Meaning of my Color Scheme

- January 24, 2020
The color scheme for my magazine will be white, black and gold. The reason for these colors is because they will stand out in a fashionable way. WHITE: In media and other social things, the color white is a basic but classic color. it will give a nice background for the image i am going to insert. The lettering on the cover may also be white, depending on the models. BLACK: The color black goes with everything, whether it's clothing, lettering, or even accessories. A dark background, in my opinion will be a little too dark for my liking, but again it is depending on the models being used. GOLD: The color gold is an odd color but it depends on the colors surrounding it. For example, if there was a bright color surrounding it like the color yellow or lime green then it would not match but the basic colors black and white go with almost everything.
Post a Comment
Read more

Picking a Model for my Magazine

- January 10, 2020
In my magazine, there is supposed to be both a male and a female on the cover. The reason for this is to not section down only one gender and be biased, after all it is a fashion magazine. There will be a handful of candidates chosen from my high school. There will no restrictions on their age, weight , ethnicity, and obviously their age. I will choose the best candidates to represent my magazine.
Post a Comment
Read more

- January 04, 2020
Representation refers to the idea that everything we see/hear in the media has been constructed. This can be seen in magazines, newspapers, radios, and other forms. For example, when talking about a politician, the idea of them is being constructed, not the actual person. "Codes" also play a big role in media representation,. they can range from language, color, clothing, and specific signs. This relates to my magazines because using a certain code to influence readers.
Post a Comment
Read more

- January 03, 2020
The Media reinforcement theory states that media is not fully responsible for establishing and changing the beliefs of people. This theory suggests that what is seen and heard from the media only serves to further support your personal beliefs. This can relate to my magazine by influencing the belief of a person towards a certain style.
Post a Comment
Read more
More posts